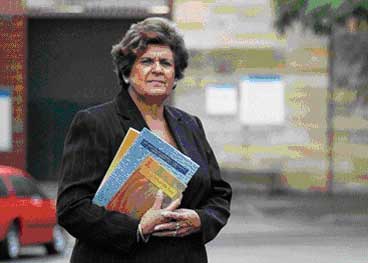 By the Chairperson of the New South Wales Aboriginal Land Council, Bev Manton

That's the central aim of a new initiative-Books Behind Bars--from the State's peak Aboriginal representative organisation.

NSWALC is backing moves to increase the amount of books and educational materials for inmates in the more than 30 prisons and correctional centres throughout the State as part of an ongoing campaign to improve prison conditions and highlight the increasing incarceration rate.

NSWALC has publicly expressed its concerns about the alarming incidence of Aboriginal people being jailed in NSW, particularly our youth.

Recent reports have shown they are nearly 26 times more likely to be jailed than their non-Aboriginal peers.

Imprisonment rates are increasing but this appears to be due to changes in remand and sentencing procedures rather than increased offending.

The nine-member Council has resolved to continue to highlight these issues through a public awareness and advocacy campaign in coming months, particularly one which highlights successful diversionary programs for our people.

It is backing moves by the Australian Prison Foundation to extend its National Prison Book Program into New South Wales.

The Foundation is a Victorian-based not-for-profit organisation which seeks to improve the lives and communities of prisoners in the hope of reducing the likelihood of their return to the prison system.

Research by the Foundation has shown that many prisons cannot keep up with the demand for educational resources and books.

The Foundation provides free books and educational materials to prisoners and prison libraries in Tasmania, the ACT and South Australia, along with selected facilities in Queensland, Western Australia and Victoria.

It has recently written to the NSW Government seeking permission to extend its reach into New South Wales.  It has also been looking for organisations in NSW to become collection points for donated books and educational materials.

NSWALC has written to the relevant authorities in NSW in support of the initiative and has nominated its offices across NSW as collection points for books.

It has also provided a special one-off grant of $5,000 to assist the Foundation with its administration costs, particularly those related to transport and promotion of the voluntary scheme.

Council has also allocated a sum of $5,000 to kick off its Books Behind Bars program.

This money will be used to source new and used books destined for the State's correctional services system.

The Library Services section of Corrective Services in NSW has informed NSWALC there is a great demand and need for Aboriginal specific books and educational materials.

Constant requests are received from inmates for Aboriginal specific books and resources.

The NSW Government spends more than a billion dollars a year maintaining its prison system. Its libraries budget is about $200,000 a year.

This equates to about $25 a year for each inmate....less than the cost of one average paperback.