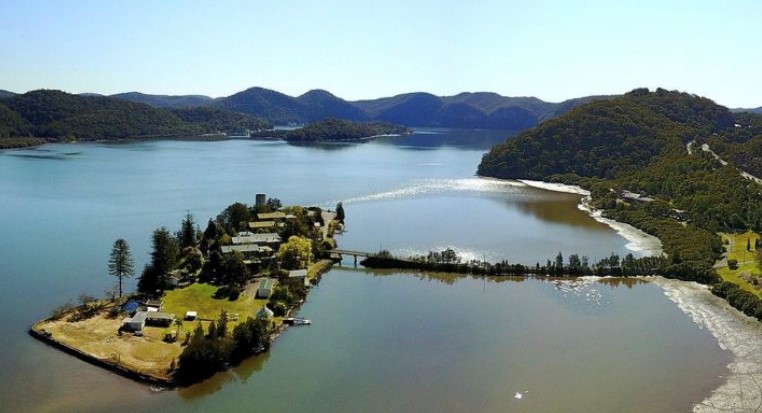 A bright new future is ahead for Kooroowall-Undi, or  Peat Island,  on the NSW Central Coast, following an historic ownership transfer to the Darkinjung Local Aboriginal Land Council.

The island and a portion of the mainland foreshore at Mooney Mooney on Deerubbin,  or the Hawkesbury River, are now owned by the DLALC, following an eight-year process and 10 months of intense negotiations.

The eight-hectare island was the subject of a 2016 land claim under the Aboriginal Land Rights Act 1983 (NSW). While that claim was originally rejected, recent negotiations have seen the DLALC secure it freehold, with a number of commitments from the NSW Government.

They include the ongoing management of site security for two years, the demolition of two condemned buildings, liability for hazardous materials for three years, and the NSW Government continuing to lead the island and broader precinct’s rezoning process.

The DLALC  Chairperson Barry ‘BJ’ Duncan says he and his Board look forward to the island ultimately being transformed into a site everyone can be proud of.

“Kooroowall-Undi has languished for too long, and we have many possibilities that we’ll workshop with our Members, on an economically-productive and culturally-appropriate future for the island.

Our plans will of course be focused on Aboriginal employment, business development and economic growth,” he said.

The eight-hectare island has an infamous recent past, and has been sitting unused for the  last 12 years. It was  an asylum from the turn of the 20th century and later as a facility for people with intellectual and mental disabilities, before finally being decommissioned in 2010.

BJ Duncan says the experiences of former residents must also be acknowledged.

“The Peat Island history over the last century or so isn’t only about sorrow, it’s about resilience. We want to do justice to the strength of the ex-residents and staff of the former facility. Acknowledging their experiences with respect, will also assist with the island’s deep spirit into the future,” he said.

The island is home to the Darkinjung people and its traditional name Kooroowall-Undi means “Place of the Bandicoots”. It sits in one of the most beautiful vistas along Deerubbin and is part of the birthplace of the extensive Baiame Creation story, which begins at the back of the Central Coast.

DLALC CEO Brendan Moyle says the area is steeped in cultural significance, and its ancient culture and lore should be celebrated at national and international levels.

“Too often, tourists from around Australia and the world bypass the NSW East Coast to learn more about ancient Aboriginal Dreaming stories and practices across Northern Australia. This transfer now opens an opportunity to create a place where we can showcase ancient and contemporary Darkinjung culture for everyone to enjoy,” he said.

It is still early days, although clearing work has already begun. A Bunya Pine has also been planted, to signify a nourishing connection between the Darkinjung Ancestors, and the bright economic and cultural future of Kooroowall-Undi.