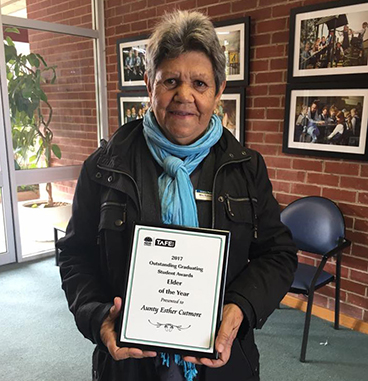 The sound of children singing swelled out onto the street from Cowra Public School, a strong woman’s voice leading them.

Two passersby stopped to listen, with one asking the other “What language is that? It’s beautiful!”

The other smiled. “That’s the Wiradjuri class. And sounds like Aunty Esther’s singing with them.”

Aunty Esther is Esther Cutmore, a local Elder who’s been instrumental in making the Wiradjuri language an integral part of the school’s curriculum.

“I absolutely love it,” she said. “I thought I might be too old for formal study, but learning my language and teaching it to the local children is an absolute joy.”

And learn she did. Aunty Esther completed Certificates 1 and 2 in Aboriginal Languages, a Certificate 2 in Music and is now undertaking a two-year Graduate Diploma in the Wiradjuri language at Charles Sturt University in Wagga Wagga.

“There are 69 of us learning Wiradjuri at CSU,” she said. “Aged mid-20’s and up. I’m still the oldest in my course, but that doesn’t worry me anymore!”

The Cowra Public School Deputy Principal and Wiradjuri man Albert Murray approached her early in her studies to help design and deliver Wiradjuri classes, an offer she gladly accepted.

“It’s been a wonderful journey for us, the school and for our students. We teach Kindergarten to Year 6, and it’s something the children look forward to each week.”

However, the Coronavirus pandemic has impacted teaching and learning at Cowra Public School, and being 74 years old, Aunty Esther now needs to remain isolated at home.

“Cowra doesn’t have any known cases of COVID-19 so far,” she said. “But we all need to follow the rules and I need to stay safe and well so I can keep teaching the Wiradjuri language when this is over.”

From being a very busy Elder and teacher, Aunty Esther now only travels into town once a week. Her daughter Treena registered her for NSW Aboriginal Land Council’s food relief box, which she’s now received.

“I really appreciate the package,” she said. “And it’s a credit that NSWALC has gone to such a big effort to help community members like me. I was very happy to receive flour so I can keep baking, I’ve already had the pumpkin soup for tea, and I’m pleased that I now have rice and other basics in the cupboard.”

Aunty Esther Cutmore misses the life she’s led that has seen her win awards like the TAFE Western Elder of the Year, the Wudhagaragarra Award for Outstanding Contribution to Educational Achievement by an Elder, as well as singing in the Cowra Aboriginal Elders Choir.

But she’s a pragmatic woman, and says she has plenty to get on with at home, keeping connected with family and friends on social media and many memories to sustain her.

“My grandchildren tell me this is the longest I’ve been at home for years! They usually ask, ‘Oh are you going somewhere again, nan?’ And I tell them ‘Oh yes, and I’ll keep going while I can.'”

If you’re like more information about the NSWALC’s Food Relief Campaign, head to www.alc.org.au. Or call the Food Relief Hotline on 1800 476 777 between 10am-4pm.