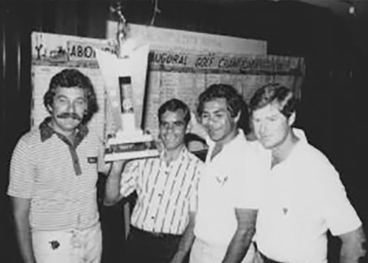 The image above is from the inaugural 1979 Championship with (left to right) Ian Stanley, Male winner Chooky Lester, Syd Jackson and Kel Llewellyn.

More than a hundred avid golfers have travelled to western Sydney today, to compete in the 40th Anniversary NSW Aboriginal Golf Championship.

The 2019 event honours and celebrates 40 years of competition, and the committee members who organised the first Championship in 1979.

As the golfers teed off early this morning at Dunheved Golf Club, they were reminded of the work and commitment of the original committee members, and those who followed them.

Over the years the championships have attracted the best Aboriginal and Torres Strait Islander golfers from across the country and have been hosted by some of the best courses and complexes including; The Vines (WA), The Horizons (NSW), Growling Frog (VIC), Bonville (NSW), Alice Springs (NT), Campbelltown (NSW) and Kennedy Bay (WA).

The NSW Aboriginal Golf Championship is open to Male and Female amateur golfers with a current Australian Handicap.

The winners of the inaugural event 40 years ago were La Perouse legend Chooky Lester and Sonya (Scott) Hinkley.