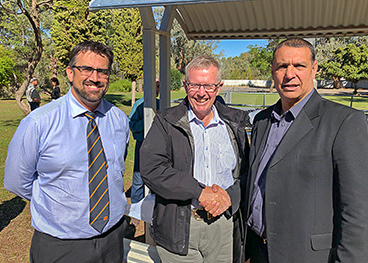 Access to fresh food is something many people take for granted, but it's been a different story for the outback community of Goodooga in far north NSW.

Goodooga's been without any fresh food for more than a decade, after its only general store shut down.

But residents' 150-kilometre round trip to the nearest grocery store is coming to an end, with the announcement of $1.7 million over three years, for a general store to be built on land owned by the Goodooga Local Aboriginal Land Council.

NSWALC Chair Roy Ah-See said the announcement is a fantastic result for the entire Goodooga community.

"Parents have had to travel hundreds of kilometres at great expense to purchase fresh food for their children. I am very pleased that this situation is going to change with the construction of a new grocery store.

"NSWALC's committed to supporting the food supply and security needs of Goodooga residents, which will be driven through the Goodooga LALC as the land and building owner," he said.

The store owner will be the North West Land Corporation (NWLC), which is made up of 17 Local Aboriginal Land Councils, to create economic development opportunities on Aboriginal land.

"I really want to thank our former CEO Jacqui Gilligan for writing the submission, and all the working groups who donated their time and resources to this.

"We are very excited about improving the food security of Goodooga residents going into the future," he said.

It's expected the store will create long term employment opportunities for locals, with Brewarrina Shire Council approving another $18m of construction work in and around the township.

So, it's all systems go in Goodooga.

The LALC land has already been cleared and the first sod will be turned in the near future.

Goodooga's goals of access to fresh food, fuel, training and ongoing employment are set to become a reality.