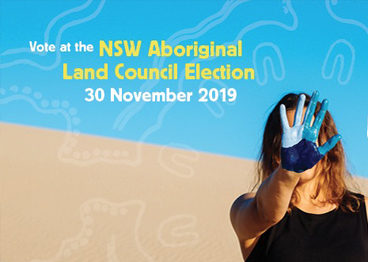 Nominations are now open for the New South Wales Aboriginal Land Council elections to be held on 30 November.

People intending to be candidates for one of nine regional councillor positions must have their nomination forms received by the returning officer no later than 12 noon on Tuesday 5 November, 2019.

Nominations must be accompanied by a $50 deposit and a signed statutory declaration that the candidate is not disqualified from holding office.

NSWALC CEO, James Christian said that with one month until nominations close, potential candidates should take into consideration the time required to prepare forms and lodge them with the NSW Election Commission, particularly if doing this by post.

“It’s important that candidates submit their nominations as early as possible so that if there is an error the candidate will have time to fix it,” Mr Christian said.

“If a defect in the form or accompanying materials is not corrected by the close of nominations then the nomination will be rejected.”

Mr Christian urged all eligible voters to have their say in this year’s election.

“Voting gives our members a say in how decisions about land, water, housing, culture and economic development benefit local communities,” he said.

“The elected Councillors are responsible for setting the strategic direction of NSWALC and making decisions on a range of important issues affecting Aboriginal people in New South Wales.”

The NSW Aboriginal Land Council elections are on Saturday, 30 November 2019.  Nine councillors will be elected, one to represent each Land Council region.

Further details about nominating and the election are can be found at: https://elections.nsw.gov.au/Elections/Other-elections/Aboriginal-Land-Council-Election-2019